The original "jingle plan" was to buy a (then current) 1999 jingle package from Reelworld, much like we had on our sister, 92 Kiss-FM.  Being a "jingle geek," I persuaded the powers-that-be to let me take a different route.  I was given a handsome budget of $10,000 to find the perfect jingles for The 80's Channel. My task was to recreate that distinct CHR jingle sound of the 1980's - from stations like WLS AM & FM, Z95, Q101, and even a little B96!  I was able to purchase 20 cuts from JAM Creative Productions - my #1 choice for jingles.

It was an interesting order, too.  We still weren't certain what our call letters would be!  The original plan (believe it or not), was to buy the call letters WMTV from a TV station in Madison, WI.  The plan was to draw a parallel to the original MTV of the 80's - since our playlist would be very similar.  We soon realized WXXY was just TOO COOL a set of call letters to give up.  Hell, we were basically playing the music of Generation X and even a little of Generation Y.  It just made sense!  And, frankly, I'm glad.  The whole TV/Radio correlation was just too confusing for my taste. 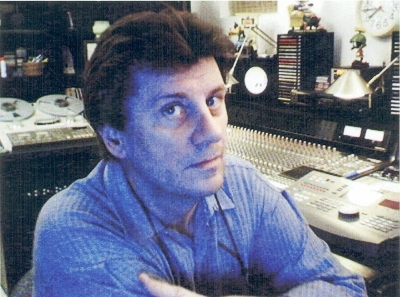 When we weren't playing jingles, we ran imaging
voiced by Eric "EE" Edwards!  Such a PRO.

The Eighties Channel achieved top 10 ratings and even some award nominations!

I HATED going up against Sandy in the "Best Evening or Overnight Show" category.  Of course, neither of us won that year.  But, hey..."it's an honor to be nominated."  Right?  RIGHT.

"The Deep End" was SUCH a cool part of The Eighties Channel.  Credit has to go to Frank Black, our first imaging director, for designing the show and playing the role of host for the initial 7 months of it's run.  But, when Frank left for KNBR/San Francisco, Sandy took it to a whole new level!  I've never known anyone with more passion than Sandy for the music they played.  I think she spent another two hours a day PLANNING those two hours on-air!

Occasionally, you'd even get to see our DJ's on TV.  On one such occasion, Murphy In The Morning appeared on NBC 5's morning show.  I will warn you - in advance - that this video ends prematurely.  (My VHS tape ran out!  How did we EVER get by without TiVo???)

One time, they made the mistake of allowing ME to promote the station on TV.  This was on ABC 7's "190 North" from 9/2/2000.  I was SO uncomfy in front of the camera!  See if you can count the number of times I look at the ceiling.

By the way, I later worked at 190 N. State during my stint at ABC Radio.  Every time I'd go by the TV studios, I had flashbacks of this awful appearance!

One of the big no-no's on The Eighties Channel was a "dead segue."  That's when you play two songs back to back with NO form of identification in-between.  We ALWAYS did one of three things: 1) Intro the song live.  2) Play a jingle.  Or 3) Play a produced sweeper.  Here's a studio list of jingles/sweepers available:

Dave Karwowski was our Marketing Director & Beth Livingston was Promotions Director -  2 awesomely talented people!  They always made sure we had cool stuff to give away.  Here's a cross-promote sheet we had in studio for jocks to use.

We ran two syndicated shows at The Eighties Channel: "Absolutely 80's with Nina Blackwood," and "Backtrax USA with Kid Kelly."  They both ran on Sunday nights, and were great additions to the lineup.  But, that's not why we initially signed up for the shows.  NOBODY wanted to work Sunday nights!  So, through the magic of syndication...in walked Nina and Kid.

This is how the business cards looked.  As I recall, we based our logo on "Thirtysomething."

"THE BEGINNING OF THE END"

"THE MIDDLE OF THE END"

"THE END" (Coming as soon as I scan MY departure column from Feder!)